skip to main | skip to sidebar

Update on A Baby Story

There has been a change in time for our episode on A Baby Story. It will now be airing on March 31st at 2:00 pm.
Posted by VirgilioClan at 7:43 PM 3 comments:

The triplets turned four months last week and I still can't believe it. They had their check up and are doing great. The doctor said it was nice seeing triplets who are healthy. Beside them catching a short lived cold two weeks ago things have been really great with their health. I know we are so lucky because it is so easy for preemies to catch some nasty things. Their stats are now:
Chris- 15.6 lbs and 23 1/4 in long
Ashley- 15.13 lbs and 23 1/2 in long
Brianna- 13.11 lbs and 23 in long
The doctor said Chris and Ashley are in the 50% for weight (boys and girls are measured differently) and Ashley is in the 90%. There are no little babies in this family. Ryan is still maintaining his weight at 29 lbs which is good because maybe just maybe he will be back on the charts by his next well visit.
All three babies have started to eat cereal (well I guess you could call it eating). Chris did great with it, Ashley hasn't quite figured it out and well Brianna, she couldn't be bothered. Ryan has learned the wonderful new method of expressing his feelings in the form of tantrums. I had no idea it could start this early. He is one determined little man.
Posted by VirgilioClan at 4:24 PM No comments:

Well, we finally have a date and time for our episode of A Baby Story. It will be aired on March 31st at 3:00 pm. We are a little nervous about it because this will be the first time we are going to see it. You never know what they are going to put in it and how it is going to turn out. I am really looking forward to seeing the babies birth.
Posted by VirgilioClan at 5:48 PM No comments: 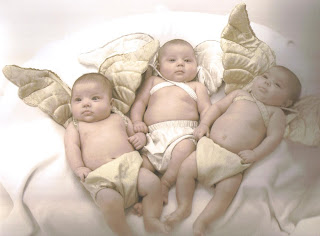 Things have been going pretty well lately. The big thing that has been happening now for two weeks is that the babies are sleeping at night. Well, kinda... they have their last feeding around 7/8:00 and then go to bed. Mike and I do usually get up a bunch of times through out the night to give binkies but the next feeding usually happens around 4:00 am. For three babies to go that long through the night I can't complain even if we do have to go to their room many times.

Ryan had his 15 month well check this past week and wouldn't you know it, the poor kid had his first ear infection. Never complained about it but it seems all the teething he has been doing really caught up to him this time.
Posted by VirgilioClan at 6:42 PM No comments: 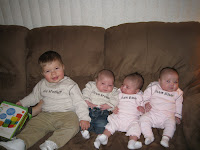 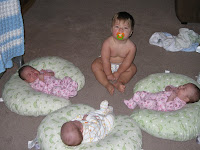 The babies had their two month check up today and once again amazed us all with their great weight gain.
Christopher- 11.2 lbs and 22 in
Ashley- 11.10 lbs and 21 in
Brianna- 10.2 lbs and 21 in
All the babies received four nasty shots but were tough and didn't cry long. I swear the shots are harder on me then they are on the kids.
Posted by VirgilioClan at 2:13 PM No comments:

Mom and girls only

Today I had my first outing with just the girls. We headed over to a MOPS meeting while the boys stayed behind with Nana. The girls got plenty of attention from the other moms and I got a break. They even did a feeding for me so I got to sit back and relax. It was a great first outing for us ladies and just the first of many.
Posted by VirgilioClan at 1:08 PM 1 comment:

Well, the triplets 1st Christmas has come and gone. We can't believe how fast time is going by and how big they are getting! At the last doctor's visit, which was their 5 week check-up, Brianna weighed 8.8, Chris weighed 8.9 and Ashley weighed in at a staggering 9.4! They are doing so well, we are so happy and continue to feel so blessed. In addition to the health of the babies, we have been overwhelmed with the support from our family, friends and community. A few days before Christmas, our priest came over with gifts that had been given to us from the church and it was amazing. We received over 30 boxes of baby wipes, several boxes of diapers, clothes and toys for the babies, and a bunch of grocery store gift cards. Then, the next day the Knights of Columbus sent over a turkey dinner with all the fixins. Not to mention the meals being dropped off on almost a daily basis. We're so grateful and humbled. It's amazing to receive such generosity and to know so many people are looking out for us! It really enhanced our Christmas joy. Speaking of Christmas, what an adventure! If you don't recall, it was pretty nasty weather that day, raining for most of it. Well, wouldn't you know it, we drive all the way from Levittown to the NJ Turnpike without a problem and as soon as we get on the TP, the windshield wiper flies off on the passenger side, leaving behind the metal arm which is now scraping the windshield. We pulled off the road and parked on the shoulder (always fun on the Turnpike) and tried to fix it but couldn't. We pulled the arm away from the windshield and drove to the next exit where we found an STS. There a man put on a new wiper blade and everything seemed to be working fine. We drove a few miles to get back on the Turnpike and all was well, then we got back on the Turnpike. As soon as we got on the entrance ramp, the wipers collided with each other (our car doesn't have the wipers that move in the same direction, ours criss cross) and bowed out away from the windshield. We turned them off and they seemed to right themselves, so we turned them back on. They bowed again and this time the new wiper snapped off and began scratching the windshield again! We pulled off...again...and fixed the wiper just well enough to drive. Eventually we made it up to North Jersey and got the wipers fixed. That was the end of the drama, we then spent a nice day with family, exchanging gifts with Mike's family then migrating over to Laura's parents' house for the evening. We made it home in one piece and tucked the kids into bed. Christmas day was a little nuts early because we planned on letting Ryan open presents then going to church, then come home and relax the rest of the day, but Ryan decided to sleep in. By the time he got up, we were pressed for time so we had to let him finish opening presents after church. All in all the holiday went well for us, God willing we made it up north and home again safely and now we are looking forward to New Year's when Laura's parents will be watching our babies at our house, allowing us a night out at our friends' house for a party. Woo hoo!
Posted by VirgilioClan at 10:48 AM No comments: 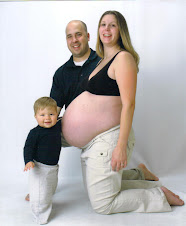